BANGALORE — If the pandemic had not hit, Atlanta-based Sucheta Rawal would have reached her goal of traveling to 100 countries by this summer. Instead, she watched helplessly as countries began shuttering, and her March cruise to Vietnam and Cambodia fizzled out.

Three months of agony followed. But when restrictions began easing, she booked an overnight trip close to home. It opened the floodgates. Since then she has traveled every one to two weeks, almost with a vengeance. No surprise then that this trend has a name: revenge travel.

Though ominous-sounding, revenge travel is a riff on the 1980s concept of revenge spending, coined when consumer spending exploded in China as it emerged from restrictions. The pattern was repeated as citizens surfaced from lockdown a few months ago: A luxury brand store in Guangzhou racked up $2.7 million in sales in one day. Industry experts believe revenge travel is a good thing, and speculate that travelers will come to look at travel as a gift, traveling more to make up for lost trips as restrictions ease.

“For me travel is not just a vacation. My entire life, work, learning and sharing revolves around travel. One by one, trips to the ‘stans, Central Asia, Rwanda, Botswana, Bahamas, Canada, as well as conferences, book festivals and everything else got canceled,” said Rawal. A food and travel writer, she also runs Go Eat Give, an organization that promotes cross-cultural connections through sustainable vacations. “I had never imagined a time that I won’t be able to travel due to country lockdowns or long-lasting viruses. After a few weeks at home, I started to get depressed,” she said. So when restrictions eased, the pent up angst just had to find a release and she felt she had to make up for what was lost.

As early as April, Americans were already feeling restless. A survey of 10,000 North American leisure travelers by Fuel Travel, an organization offering e-commerce solutions to the travel and hospitality industry, found that 59% would certainly travel in 2020. The Harris Poll survey of 2,500 people in the U.S. revealed that 57% would travel to meet with family and friends, while 48% would travel for a change of scenery. The poll also indicated that people in states where the pandemic was severe were most likely to travel within the next four months. The pandemic thwarted Sucheta Rawal’s plan to visit 100 countries by summer. But when restrictions began to ease, she hit the road with a vengeance. (Courtesy of Sucheta Rawal)

Elsewhere in the world, there have been similar signs. The first hint that travel in Southeast Asia will bounce with a bang came from China. And in the southern hemisphere, industry confidence soared when Ernst & Young Australia released a report in early July that the trans-Tasman travel bubble is expected to “turbocharge” the local travel industry once travel restrictions are lifted.

But the crucial word has been domestic — or regional as the case may be — and that has been the overarching leitmotif across the world. With borders closed and international flights still grounded, traveling abroad is still some distance away. “I started traveling within the East Coast, but am moving around the U.S. now,” said Rawal. “I have recently traveled to Colorado, the U.S. Virgin Islands, Florida Keys, Tennessee, Georgia, Outer Banks and Virginia. I am planning to go to Columbia [South Carolina], Yellowstone, Jackson Hole and Mexico next.”

In Europe, where travel within the European Union is increasingly opening up, travel within areas such as Scandinavia has been surging. “People have been going out cycling, kayaking and into nature in the region,” said Scandinavian Tourist Board representative Mohit Batra. “But now they are going on holidays, though they prefer to stay within the Nordic region.” 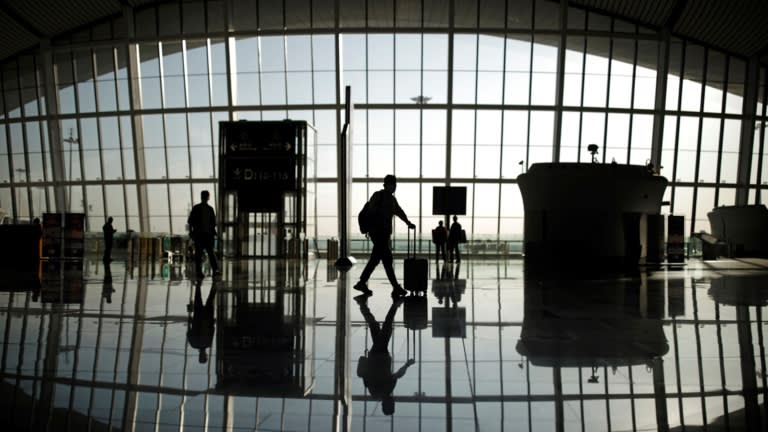 Travelers are silhouetted at Beijing Daxing International Airport in Beijing in September.

“There has been a lot of emphasis on domestic consumption. Visit Copenhagen, for example, has aggressively promoted itself within the region, which it has never done before,” said Batra. He also drew attention to a Swedish Civil Contingencies Agency/Kantar Sifo survey in which “45% of respondents stated that they will be traveling once or twice within Sweden, with a travel time of two hours or more.”

All this has meant that road trips have become the preferred mode of travel, accompanied by the rush to insulate as much as possible while on the road, especially in the U.S., pushing up demand for recreational vehicles. According to the RV Industry Association, the sector shipped 40,462 units in June this year alone, up 11% compared with June 2019.

India, one of the fastest-growing tourism markets, seems to be seeing a similar trend as well. In 2019, it was predicted that 50 million Indians would travel abroad by the end of 2020, but the outlook for domestic tourism was off the charts, with an expected 1.82 billion visits. With lockdowns in place since March, those numbers have taken a severe beating. But industry insiders say there has been a slow but cautious rekindling since as restrictions start to ease. Tourists walk along a river in the northern Indian district of Ganderbal on Sept. 7. After booming in 2019, domestic travel in the South Asian country is slowing picking back up as COVID-19 restrictions ease.

“Travelers in the South are driving to Hampi, Coorg and Goa, while those in Mumbai and Delhi are headed to the nearest hill stations,” said Loveleen Multani Arun of Bangalore-based Panache World, a boutique travel solutions company. “Revenge travel seems like a negative term and apt at the same time. People are traveling but not at the cost of safety.”