Routes: Where can I fly now? + More long-hauls return to SFO + United refunds

A new online map helps travelers learn about COVID-related arrival restrictions worldwide; more foreign carriers are coming back to San Francisco and Los Angeles, but one likely won’t return until next year; United eases strict rules limiting refunds when it cancels flights; United and Alaska will require passengers to fill out health evaluations; travelers to Alaska have a new way to get around the state’s mandatory 14-day self-quarantine; and New York LaGuardia cuts the ribbon on a spacious, sparkling new arrivals/departures hall.

Like many, you are probably wondering where you can and can’t fly these days. Checking out government-imposed coronavirus restrictions on international travel can be difficult because they often change and can apply to arrivals from some countries but not others. To cut through the confusion, the International Air Transport Association this week released an interactive world map of COVID-19 regulations. Users can simply click on the country they want to visit to see what the rules are for foreign arrivals there. They can also sign up to be alerted when rules change.

In route news, more international carriers are coming back to San Francisco International in the weeks ahead. According to the latest schedule filings, Japan Airlines will revive some of its suspended North American routes in July, including San Francisco-Tokyo Narita with four flights a week (SFO-Haneda is still suspended). JAL is also bringing back service next month to Dallas/Ft. Worth and New York JFK; it is already flying from Tokyo to Los Angeles, Chicago and Vancouver. JAL has not yet scheduled its return to Seattle, San Diego or Boston.

Air France’s latest schedule for July 6 to Sept. 1 shows the airline coming back to SFO with three weekly flights (Monday, Thursday, Saturday) to Paris CDG – although it will use a 777-300ER instead of the A380 it formerly operated (Air France has permanently grounded all its super-jumbo A380s). Other U.S. destinations for Air France during that period include daily flights to Atlanta and Los Angeles; 10 a week to New York JFK; and three a week to Boston and Chicago. In addition, Air France has scheduled three weekly flights from Paris to Papeete, Tahiti via a stop in LAX, starting Aug. 4.

KLM announced last week that San Francisco is one of destinations where it plans to revive service from Amsterdam in July, along with Washington D.C., Vancouver and Calgary, although it didn’t give specific schedules. “As soon as authorities relax travel restrictions, KLM will also open these destinations for ticket sales where possible,” the airline said. KLM added some valuable words of advice that apply to any travelers planning an international trip during these turbulent times: “In view of the constantly changing rules and travel restrictions, the KLM schedule will be adjusted accordingly. We advise customers to familiarize themselves with applicable travel restrictions that vary from country to country and person to person and may be subject to change prior to booking.”

Emirates has slightly revised its schedule for a resumption of San Francisco-Dubai service from what we reported last week. It will now start the route July 16 instead of July 1, with three weekly 777-300ER flights, switching to a daily A380 flight on Aug. 1. The airline will follow that same formula for Los Angeles-Dubai service beginning July 15, starting with four weekly 777 flights and shifting to daily A380 departures on Aug. 1.

At Los Angeles International, Virgin Atlantic now plans to restart its dormant London Heathrow route on July 21, along with service from LHR to New York JFK and Orlando – although it noted that it is monitoring governmental travel restrictions “extremely closely,” including the U.K.’s new mandatory 14-day quarantine for arriving foreign nationals. And Turkish Airlines, which had shut down all long-haul flights, plans to start flying some of them again this month, including three weekly Istanbul-LAX flights as of June 24. (Note: Turkish is offering a 40% discount to health care workers who book its website by Aug. 1.) Another airline that shut down all long-haul routes is Air New Zealand, but don’t expect to see them come back anytime soon. CEO Greg Foran said this week the airline is unlikely to resume any significant long-haul flying until 2021.

Thinking of flying to Hawaii or Canada? Listen to Chris discuss summer trips on KCBS Radio.


Maybe it’s due to pressure from the Transportation Department and consumers, or maybe it’s because the airline is adding more flights to its schedule, but United is now making it easier for customers to get a full refund when the airline cancels its flight. At the height of the industry’s pandemic-based flight cancellation tsunami, United was offering to provide refunds to passengers whose flights were cancelled only if it couldn’t get them on another flight departing within 25 hours – assuming the passenger didn’t accept the rebooked arrangements. (Instead of cash refunds, United offered electronic travel vouchers.) Then United lowered that rebooking time requirement for refunds to six hours, and now it is down to two hours – back where it was before this all started. Phew!

United had boosted the rule to 25 hours because it was facing a flood of refund requests at a time when revenue from new bookings was dropping through the floor. Like other airlines, United was desperate to hold onto as much cash as it could, so it had a big incentive to make cash refunds harder to get.

Don’t miss a shred of important travel news! Sign up for our FREE bi-weekly email alerts.

Meanwhile, United this week added a new step to passenger check-ins, asking customers to fill out a personal health evaluation form. Passengers are expected to attest to the fact that they haven’t experienced any coronavirus-like symptoms in the two weeks prior to their flight and have not been diagnosed with COVID-19 in the past three weeks. They are also asked if they had contact with anyone who tested positive in the previous two weeks and must agree to United’s other safety protocols like wearing a mask on board.

Alaska Airlines said it will add a similar requirement beginning June 30, asking fliers to fill out a health agreement during check-in (it can also be filled out on the airline’s mobile app). Alaska passengers will have to confirm that they haven’t had any COVID symptoms in the previous 72 hours, or come into contact with anyone who did, and agree to wear a face mask. The health agreement is part of the airline’s “Next Level Care” program unveiled this week, which also promises that Alaska will block out middle seats at least through July 31 and will stop taking bookings once a flight has reached 65% of its seating capacity. Boarding is now done by row number from back to front, and in smaller groups, Alaska said. 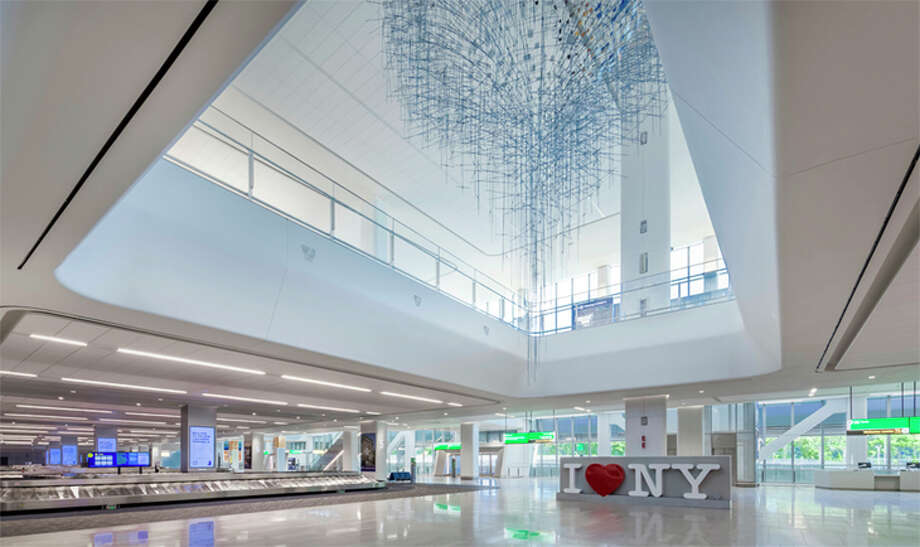 New York LaGuardia this weekend cuts the ribbon on a big new Terminal B Arrivals/Departures Hall.

Speaking of Alaska, anyone flying into that state faces a mandatory 14-day self-quarantine. But the state’s Division of Public Health has now come up with an alternative: If a traveler gets a COVID-19 test within 72 hours of boarding their plane, they can skip the quarantine by presenting negative test results upon arrival. If they can’t schedule that, they can now get a free COVID test in their Alaska arrival airport – but they’ll then have to self-quarantine until the results come back, which usually takes about two days (that’s still a lot better than 14).

This weekend brings some major airport news for New York City: June 13 is the opening date for LaGuardia Airport’s new Terminal B Arrivals and Departures Hall, which New York Gov. Andrew Cuomo is calling “the biggest milestone to date in the transformation of LaGuardia Airport into a world-class transportation hub.” The airport is in the midst of a years-long $8 billion reconstruction encompassing all its structures (except the historic Marine Air Terminal). The new Terminal B Arrivals and Departures Hall – serving United, American, Southwest and Air Canada – covers 850,000 square feet in four stories.


LaGuardia’s new departures level has four check-in islands with 75 individual check-in kiosks and a central oversize bag check-in station, as well as 16 security screening lanes – three times more than the terminal’s predecessor. The terminal also has 17 new food and beverage outlets. Last week, United opened a new United Club located post-security near its gates; it’s 30% larger than the previous LGA Club. The new arrivals/departures hall is only part of the eventual rebuild. As American Airlines notes, “Many flights will continue to operate from the B, C and D gates in the original Central Terminal Building. After checking in at the new Arrivals and Departures Hall, customers will be able to reach all B, C and D gates via a temporary walkway.”

Chris McGinnis is SFGATE’s senior travel correspondent. You can reach him via email or follow him on Twitter or Facebook. Don’t miss a shred of important travel news by signing up for his FREE biweekly email updates!

SFGATE participates in various affiliate marketing programs, which means we may get paid commissions on editorially chosen products purchased through our links to retailer sites.