Airport retailer Hudson will cut 81 workers at Dallas Love Field and Expedia plans to lay off 116 employees at its Dallas office as the travel industry continues to perform poorly during the COVID-19 pandemic.

Letters from the two companies were posted Thursday by the Texas Workforce Commission, adding to the growing number of layoffs and furloughs coming this fall to the battered air travel industry.

“[Hudson] has seen a sudden, dramatic, and unexpected downturn in sales volume at its Dallas Love Field Airport location as a result of the COVID-19 global pandemic, which makes continuing operations as is unsustainable, and has caused business needs and circumstances to change in ways that were not reasonably foreseeable as recently as just several days ago,” said a letter from Hudson CEO Roger Fordyce to the Texas Workforce Commission. 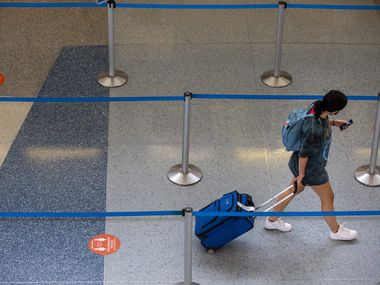 Billy Bob’s Texas is in the process of being converted into a new food concept run by another company called AV8 Bar and Grill.

The Hudson job cuts were effective July 31, the company said in the letter.

Expedia has an office near the LBJ Freeway in northern Dallas that’s home to its Hotels.com subsidiary. Hotels.com was founded and headquartered in Dallas in 1991 and was based here until it was sold to Seattle-based Expedia in 2001.

Those layoffs will come between Oct. 7 and Dec. 1.

The travel industry, including North Texas’ large airline sector, has been hit hard by the pandemic. The number of passengers traveling through U.S. airports is down 86% since the beginning of April compared with the same period last year.

At Dallas Love Field, passenger numbers were down 58% in June from the year before.

Air traffic statistics were positive in June before a surge in COVID-19 cases hit states including Texas, Florida and Arizona.

Hudson said it actually began to recall furloughed employees based on COVID-19 data that gave the company “reason to expect the worse of the crisis would soon be over.”

“Unfortunately, in recent weeks the promise of this recovery has hit another unexpected challenge as the spread of the COVID-19 virus around the United States has surged at an increasing and unprecedented rate, resulting in the imposition of new governmental orders and quarantines,” Fordyce said in his letter.

Hudson has also sent layoff notifications to New York state for 377 workers at various airports and to Washington state for 91 workers at Seattle-Tacoma International Airport.

Hudson is owned by Swiss-based Dufry Group and had about 31,000 employees worldwide at the beginning of 2019.

Expedia CEO Peter Kern said last week in a conference call that the travel industry recovery is not taking a linear path.

Expedia was struggling even before the pandemic and laid off about 12% of its global employees in February.

“We will have a bouncy recovery, there’s no question,” he said. “We’ve seen virus numbers go up in certain places, we’ve seen new restrictions come into certain geographies, and it appears like that will be the state of the union until things change scientifically.”

Road trip checklist: How to prep for California car travel in the coronavirus pandemic